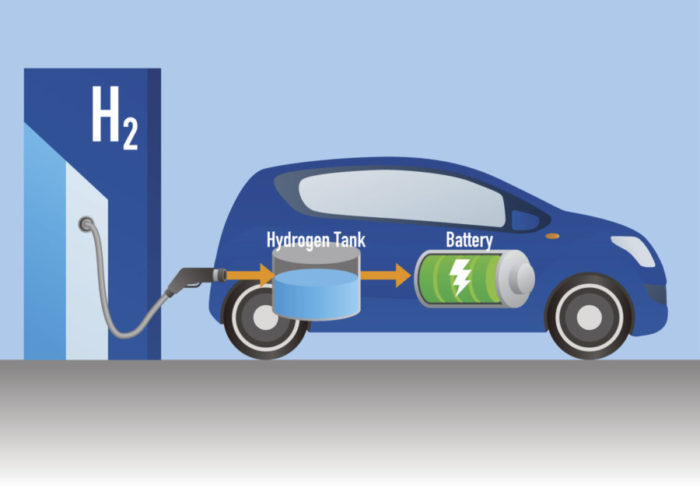 The History of the Automotive industry began with oil.

And although different alternatives exist (LPG, CNG, biofuels, electricity), fossil energy from oil continues to hold a dominant position on the market. For several years now, a renewable energy source has been apprehensively trying to include itself among the clean energies solutions. It is intended to be clean and economical: hydrogen.

For professionals driving light commercial vehicles, this solution seems at first sight to be a wise choice. Particularly thanks to its range very close to combustion vehicles (about 600km for the Nissan Solid Oxyd Fuel Cell – base model eNV200 announced for 2020).

It also remains to be proven that hydrogen is cleaner than other renewable energies.

According to Philippe Boucly, President of the French Association for Hydrogen and Fuel Cells: “The hydrogen atom is the simplest, lightest and most abundant element on earth. Colorless, odorless and non-toxic, hydrogen is highly energetic with a 33 kWh/gram: 2.5 times more than natural gas and 3 times more than diesel. Its clean combustion properties emit neither greenhouse gases nor pollutants, only heat and water”.

On the other hand, regarding the issue of production, AFHYPAC indicates that the most economical and widely used process is called the reforming of natural gas.
This technique involves in reacting methane with heated water vapor. It results in a mixture of hydrogen and carbon monoxide. It will be again exposed to very hot steam. Once cooled, the resulting mixture is divided to collect the hydrogen.

However, it is the last process that is problematic. This final step generates carbon, which is a barrier to environmental protection: the gasification process and the biomass pyrolysis.

They make it possible to obtain hydrogen and carbon monoxide by chemical transformation of the wood at a very high temperature (1200 ° C.).

Apart from the ecological problem posed by the production of this atom (95% of the hydrogen atom is produced from fossil resources such as natural gas, oil, wood or coal), the question of storage is also raised.

Due to its low density, it takes no less than 11 square meters to store 1 kg of hydrogen at atmospheric pressure and ambient temperature.

To find out more about our Automotive & Mobility Surveys, contact us.